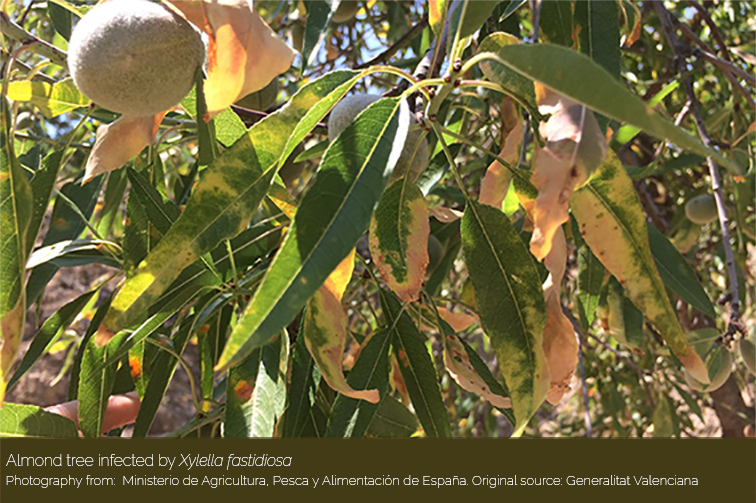 Why is the phytopathogenic bacterium Xylella fastidiosa feared?

Xylella fastidiosa (Xf) is one of the most dangerous plant bacteria worldwide, causing a variety of diseases, with huge economic impact for agriculture and the environment. It is considered a “fastidious” microorganism because it is difficult to detect and culture, due to its limited metabolic capacities and reduced genome. Xf lives in the water conducts (xylem vessels) of infected plants and in the foregut of insect vectors, mainly spittlebugs and sharpshooters, which can transmit bacteria to new host plants by injection during feeding. Xf has a wide host range, causing infections in more than 550 plant species (EPPO 2018), including crops of great economic importance worldwide like grapevine, citrus, coffee, almond, olive trees as well as ornamental species. 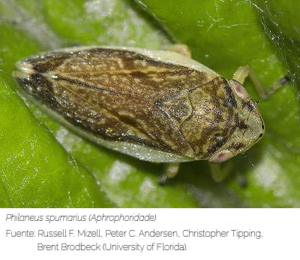 The phytopathogen Xf invades the plant vessels, where it multiplies and adheres by synthesizing a matrix that protects the bacteria. These 3D structures, called biofilms, are a common form of colonization by microorganisms. In some clinical pathogens, biofilm formation is dangerous because it leads to persistent infection in e.g. catheters. In the case of Xylella, biofilms not only block water and nutrients transport through the plant, but also are involved in the transmission of the bacteria by favoring adhesion to the insects’ foregut.

The effects caused by Xf depend on the host plant and range from growth stunting to plant death and include leaf schorching and chlorosis, symptoms that are often indistinguishable from those of water deficiency, especially in summer. Xf also colonizes many grasses remaining asymptomatic for long periods, hampering detection and serving as a reservoir in this never-ending struggle against the fastidious pathogen.

Is Xylella fastidiosa a “new” pathogen?

Xylella is widely distributed and established in North and South America, but it has recently appeared in Asia and Europe, thus emerging as a global threat. The illness was first reported at the end of the 19th century to affect grapevine crops in North California. However, given the difficulties to detect Xf, it was thought that the so called Pierce’s disease was caused by a virus for more than three decades. Nowadays, this disease continues to provoke tremendous crop losses every year in America.

In 2013, Xf was detected for the first time in the Old World infecting olive trees severely affected in Apulia, southern Italy. It was first claimed that it was deliberately introduced to repurpose the land by British investors or the local mafia and even laboratories were blamed. Genetic studies have shown that the bacterial strains isolated in Italy are related to those coming from Central America (Giampetruzzi, et al. 2017). The scientific community supports that the “olive tree killer” was probably inadvertently transported in ornamental plants from Costa Rica to Italy.

Upon compulsory analysis all over our continent, different Xylella subspecies were discovered in various host species and environments in southern France, Corsica and Spain. Unfortunately, the number of additional introductions reported in Europe increases with the surveys carried out. The last outbreaks in Europe were reported in Tuscany (northern Italy) in late 2018 and in 2019 near to Porto (Portugal), where lavender and other ornamental plants were found positive for Xylella in a zoo garden. 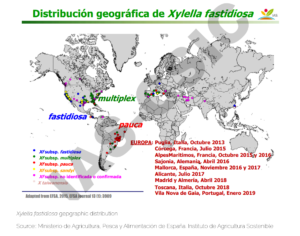 What is the situation in Spain?

In 2016, Xylella was detected in several points through Islas Baleares, so the entire territory had to be declared as area under containment in 2017. This year, the presence of Xf subsp. multiplex was also reported in Alicante, mainland Spain. It was found especially in almond plants, but also on rosemary and myrtle-leaf milkwort among others. Finally, on April 2018, Xf was firstly reported in an olive tree plant in mainland Spain (Madrid), where eradication measures had to be taken. The recent introduction of X. fastidiosa in Spain, an area with adequate ecological conditions (i.e. potential hosts, suitable climate, and vectors), constitutes a real threat to a variety of crops of great economic importance.

Which measures are being taken to prevent Xylella fastidiosa spread?

In all EU member states, X. fastidiosa is regulated as quarantine organism under the ‘Plant Health Directive’ on protective measures against the introduction and spread of organisms that are harmful to plants. This legislation includes the controversial eradication of infected plants (and potential hosts situated 100 meters around) and establishment of a demarcated area in which containment measurements like limitation of plant movement are applied. Furthermore, there should be a strict surveillance of plant imports, which need a Xf-free certification, plants should be analysed analyzed for the pest presence of the pest even if they are asymptomatic, among other measurements.

Movement restrictions and further surveys have been also established in mainland Spain after the reported outbreaks. In AndaluciaAndalusia, the largest region in South Spain dwelling most olive tree cultures, regional governments are implementing a wide variety of control measurements and outreach campaigns for farmers.  Beside this, specific plant transport out of the Baleares was forbidden and there are several awareness campaigns to prevent travelers from carrying back home potentially infected plants. So, if you are going on vacation to a demarcated area, please do not take olive branches as souvenir!

Is there any efficient treatment against the bacteria?

No, to date there is no effective treatment to cure Xf-infected host plants. Therefore, development of efficient methods for X. fastidiosa diagnosis, prevention and control is a worldwide priority. Crop management in America has been based so far on either insect control, including the use of neonicotinoids and tramps, removal of infected plants, which usually die 1-5 years after disease occurs, or on interception of new outbreaks. Application of antibiotics to try to mitigate Xf disease progression has only been investigated under experimental conditions in the USA, and they are prohibited for crop treatment in the EU.

The recent introduction of Xf in Europe calls for urgent actions for early detection and control of the disease that should be tackled by multidisciplinary studies. There are still a lot of knowledge gaps on the biology, ecology and evolution of this pathogen bacteria. Research on Xf in Spain has been pioneered by the “Institute of Sustainable Agriculture” (IAS, CSIC, Cordoba). Researchers from IAS have worked on the identification of the strains present in our country by molecular methods, and contributed to the development of an strategy based on the use of drones to detect pre-visual symptoms of Xf infection (Zarco-Tejada et al. 2018).

On the other hand, there is also room for innovation on disease control, which is mainly focused on three lines: evaluation of chemical molecules, biological agents (e.g endophytic non-pathogenic bacteria or phages) and development of plant resistant varieties. Our company, Biomar Microbial Technologies, is working to identify solutions that would help to prevent or treat Xf plant infections. Part of our collections of extracts and pure compounds, including biofilm and conjugation inhibitors, will be screened in collaboration with Universidad de Cantabria. With these assays, our goal is to help preventing the disastrous economic and social consequences of Xf invasion throughout our continent.

Giampetruzzi, A., et al (2017). “Genome-Wide Analysis Provides Evidence on the Genetic Relatedness of the Emergent Xylella fastidiosa Genotype in Italy to Isolates from Central America.” Phytopathology 107(7): 816-827.

THE NEED OF EFECTIVE, SAVE AND SUSTAINABLE PESTICIDES 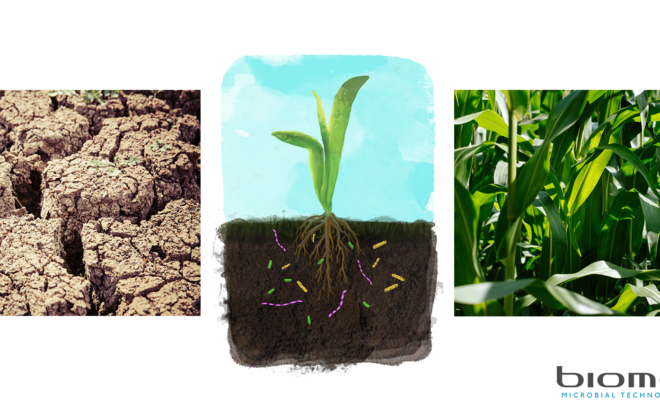